Prof. Weise Attends the Hefei Mid-Autumn Tea Party for People from All Walks of Life [合肥市各界人士国庆中秋茶话会] 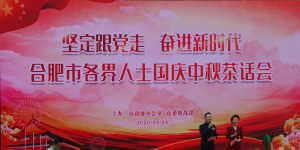 Today, on September 29, 2020, I attended the Mid-Autumn Tea Party for People from All Walks of Life [合肥市各界人士国庆中秋茶话会] in the city hall of Hefei [合肥市]. Like last year’s celebration of the 70th Anniversary of the People's Republic of China, it was a very nice event. As the name suggests, the event was attended by people from a variety of different career paths, including business representatives, representatives from several different religions, party members, military leaders, researchers, and representatives of the international community of our city. The event began with four ceremonial speeches – the first of which was held by Prof. Dr. Chunmei WU [吴春梅], the president of our Hefei University [合肥学院院长]. Then, a very nice program with different songs followed. There were several professional opera singers giving great performances. I found the performance of the CPCC youth chorus especially nice, because they are normal employees of the city hall and government, but they sang absolutely perfectly. In summary, this was a very enjoyable afternoon and I even had the chance to chat with some new friends. I hope that I will be able to attend more such events in the future. (Postscript: And I indeed got the chance to attend the 2021 Hefei National Day Tea Party for People from All Walks of Life.)