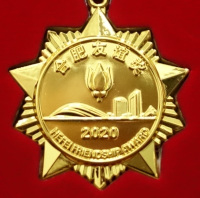 After the award ceremony, a forum where the foreign experts could give opinions about the development of our city and suggestions to improve the environment in our city was held. It was chaired by Mr. Qunying HUANG [黄群英 （安徽省合肥市科学技术局局长）], Director of the Hefei Science and Technology Bureau, who himself is an excellent researcher. Prof. Weise was one of the experts who gave a talk in this forum. All experts agreed that Hefei offers an excellent environment for both international and national researchers and innovators. Especially the investment in education, science, and infrastructure and the resulting incredibly fast development of our city were praised in several independent speeches. Several constructive comments and suggestions were put forward as well. Mr. Weiming WANG emphasized on the importance of the suggestions to help our city to further improve its environment, innovative power, and the situation of its foreign experts.

Hefei has been voted among the top-ten of most favorite Chinese cities for foreign talents for three years in a row. If we put together all the positive aspects that were mentioned by the experts attending the meeting, then this is only a logical result: Hefei is a city that offers excellent working and living environments for foreign talents, many incentives for innovators, an outstanding infrastructure and strong administrative support.