Today, Mr. Alexander Jahl from the Distributed Systems Group of the Department of Electrical Engineering and Computer Science of the University of Kassel in Germany published the source code of the Distributed Algorithms Simulator on GitHub. This is an educational piece of software written in Java, which allows students to implement many of the algorithms from the field of distributed systems, ranging from distributed critical sections over time synchronization to message flooding to the distributed computation of the greatest common divisor. The simulator then shows a visualization of how the algorithms progress and how the messages travel over the network.

The original code of the Distributed Algorithms Simulator was written by me back in 2007 to support the students of the lecture "Basisalgorithmen Verteilter Systeme" held by my PhD father Prof. Dr. Kurt Geihs. It is very rewarding and I am happy to see that this piece of educational software is still doing its job after more than a decade. I hope that the 13 generations of students in the lecture as well as the colleagues who held the exercises for them after me (and who have maintained and improved the software) found it helpful in their studies and teaching, respectively. Now that it became open source, I am curious to see how long it can remain useful.

Thank you, Alex, for maintaining it for so long and for making it OSS! 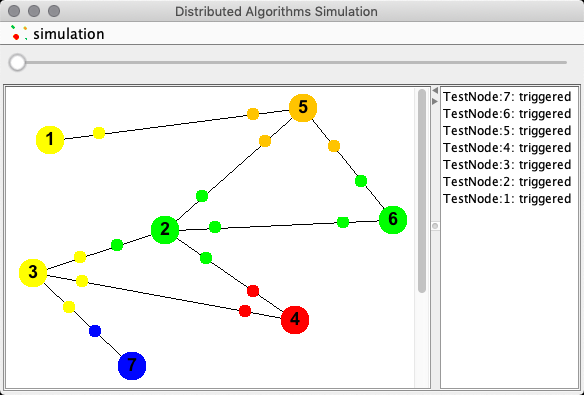